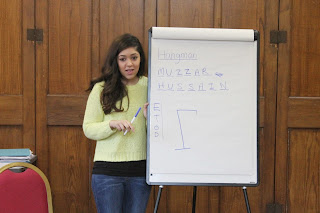 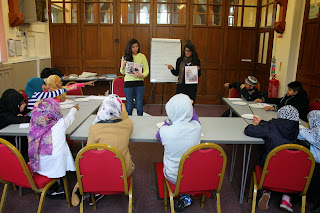 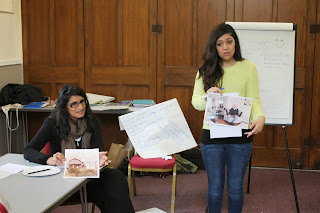 I joined in with the third session of Shamshad and Habiba’s classes at Rossendale Islamic Supplementary School this afternoon. The subject used the recordings we made a few weeks ago of Mr Muzzar Hussain, covering a range of subjects but here concentrating on his memories of travelling to and arriving in England in 1958.
The young people were first asked to uncover his name through a game of ‘hangman’. Then they divided in half and each half was shown a different photograph – one I took a few weeks ago of Mr Hussain in his house in Accrington, and the other a photograph from the 1930s of his maternal grandfather on  horseback in India (pre-Partition). They were asked to describe their feelings about the characters in the photos. and were then played a short recording of Mr Hussain reminiscences. Finally they were asked to guess which of the two photographs was of Mr Hussain.
This discussion and lesson took place in the context of Mr Hussain being described to them as among the very first Asians to settle in Haslingden, and their homework had been to discover who of their own relatives first arrived and settled in England. Shamshad and Habiba took turns in leading the class, and it provoked discussion and interest in the young people about the subject.
I was very impressed by the way the children focused on the subject, and entered into the ‘games’. Shamshad has planned the five week course with these young people to develop an awareness of, and pride in, their heritage. What I witnessed today was very encouraging.
Habiba Shenza, Muzzar Hussain., Rossendale Valley Islamic Supplementary School, Shamshad Khan