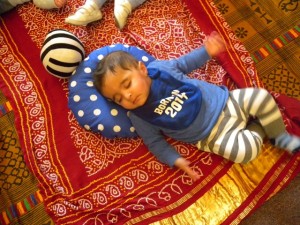 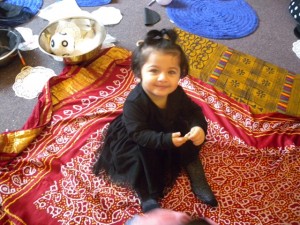 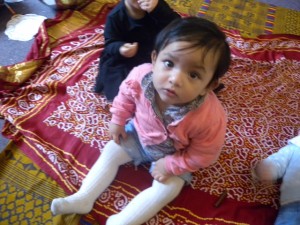 Aysha is from a Bengali background, her interview was conducted mainly in Bengali.  Her seven month year old baby Ayaan Ali’s first words were “da da, da da” (Bengali sounds). She wants her baby to understand Bengali culture “understand it good and well” and to understand Islam and not forget her roots. She wishes all joys of the world for her baby, lots of joy and for her baby to grow up to be a doctor.

Of White culture in Haslingden she appreciates the sense of equality and feels that the lack of Asian classification structure is valuable and something she wants her baby to inherit.  Aysha practises aspects of her Asian culture in relation to her baby. She told us how important massaging a baby is to help it feel relaxed and sleep well. She had fond childhood memories of using mehndi (henna), putting it on thick. The mehndi in Bangladesh she said smelt of fresh leaves and would remind her of happy times. The sample we used smelled very different, more like Dettol.

Aysha knows lullabies in Bengali which she sings to her baby and which she sang for us.

Nayla was born in Bury. Her parents lived in Karachi and spoke Urdu as well as Punjabi and Hindko at home. Her baby Arisa is seven months old and was born in Burnley General. Baby Arisa’s first words were “baba” (abba- the Urdu word for father). Nayla says about herself that she is talkative and that this quality can help make people feel comfortable. She is really good at sports and would like to pass these skills and qualities on to her baby. Her wishes for her baby are health, happiness and success.

She would like to pass on what she described as the “positive parts” of Asian culture to her children. The way people are valued and welcomed and made to feel comfortable.

Nayla values how in White local culture education is prioritised and also independence. She would like to pass these things on to her children.

Although her parents had told her stories in Urdu, Nayla wasn’t able to recall these and didn’t know any lullabies in her mother tongue. She says her baby taps herself when she sees her granddad because she wants him to sing the Arabic prayer “Allah hu” to her. She says she can’t sing it properly herself, but she taps and rocks and the baby is calmer, she also sings the nursery rhyme “The wheels on the bus”. 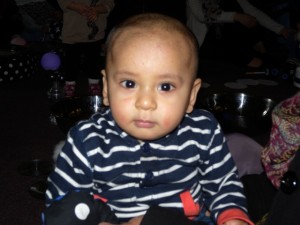 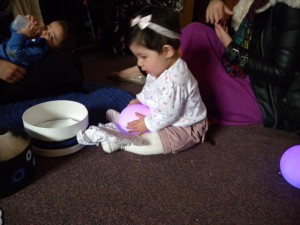 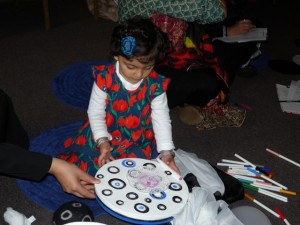 Interviewee 1 was born in Liverpool and came to Haslingden 15 years ago via Blackburn. Her baby Sarah was born in Burnley and is eleven months old. Including baby Sarah, she has four children aged fourteen, thirteen and nearly five years old. All the family speaks English in the house, her parents speak Punjabi. Baby Sarah’s first words were “baba”.

Interviewee 1 says she would like to pass on Asian habits and the nice way of meeting and greeting people. She feels the Asian Culture and her Islamic faith makes people feel comfortable. She values how people from the White local cultures are good towards you and encourage independence; she would like to pass all these values on to her children.

Interviewee 1 used to work at Curry’s, but now looks after her mum. She would like to pass on her skills of cooking, cleaning, managing the house and multi-tasking to her baby.

Rehana was born in Cardiff. She said she was not educated but had developed confidence through dealing with her “hearing problems”. She wants to pass on the quality of confidence to her children. Rehana has two boys including Mohammed Amaan; two years and six months old. Her baby’s first words were “dada” (English).

Rehana’s mother told her stories in Pashto, which her mother had told her. Rehana can’t remember these any more. The only lullaby she uses is the Arabic prayer “Allah hu”.

Interviewee 2 was born in Fairfield hospital Bury. Her baby Yumna Khan is four months old and was born in Burnley General. She also has a baby boy (twenty months old). Her son’s first words were in Pashto “amma” (mummy). Through her children she said she has learnt skills of multitasking and patience and would like to pass these on to her children along with common sense, hard work and good character. She would like her children to live exciting lives and make a difference to the world.

Interviewee 2 values a sense of community and tolerance in Asian culture. She wants her children to keep a sense of their community, family and Asian identity. In particular respect for elders. She mentioned using Asian remedies like fennel seed instead of Calpol for upset stomachs. She uses the Asian practice of massaging the baby and also of swaddling to help the baby feel secure.

Of White culture Interviewee 2 values tolerance, the acceptance “of our culture” and “multi-culturalism”, education, democracy, the NHS and equality.

She sings to her baby in English and her mother tongue and named “Wind the bobbin up” as a favourite nursery rhyme she sings often. She said her mother would remember the Pashto ones.

Interviewee 3 was born in Bangladesh, she spoke in Bengali. Her baby Alia Miah is eleven months old and was born in Burnley General.  She has three other children aged eighteen, thirteen and ten years old. Baby Alia’s first words were “thadda” (Bengali). She wished her baby would have a happy life, have a good job and do well in education. Interviewee 3 helps her baby to relax and sleep by massaging her.

She values how helpful people from the White local communities are and how they live in harmony; she would like her children to take on these parts of the culture.

Amina was born in Pakistan in Rawalpindi, and has only been in England for four months, her interview was done mainly in Urdu. She studied to basic FE level in Pakistan. Her baby Safaa is two years old, her first words were “baba, baba” (Urdu for father). She wishes education for her baby’s future.

Of her Asian culture she would like to pass on education which she sees as a big part of Asian culture and sewing skills. Her wishes for her baby were that she be caring and generous, to study and then have a job. She talked about the use of mehndi (henna) at special occasions and how it wouldn’t feel like a celebration unless there was mehndi.  She sometimes puts mehndi on her baby at night time and massages the baby which she says is good for the bones.

Of White local culture she values how friendly and helpful people are, how well they speak with each other and hopes her baby will keep this aspect of the culture.

List of links to their answers (audio and written) is coming soon… Watch this space!