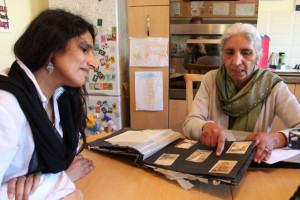 The Rossendale community has always had an interest in its local history. The local libraries are proud of their dedicated Local History rooms, and their shelves hold significant collections. Understandably most of these are about the industrial revolution and the textile history for which the area is noted.

Although a visitor to Haslingden in 2015 can’t fail to notice the large and busy South Asian community on the streets and in the shops, they would be disappointed if they went on to the local Library and tried to find out about these communities. In some areas of Haslingden the Bengali-heritage and Pakistani-heritage communities now make up over 20% of the population. But how did they get to be here? And why? This was the starting point for our Different Moons project. When we ran the pilot project at St James C.E. Primary School in Haslingden, we also found that the children from the South Asian communities knew surprisingly little about their own heritage. 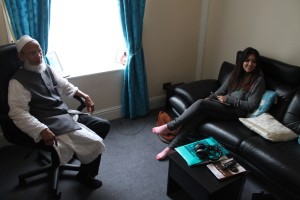 immigrants to Rossendale from the Indian sub-continent. To find out what motivated them to leave their homes and come to Lancashire, and what was their experience and memory of that time? Then to talk about the changes they had experienced during their time in Rossendale (often half a century or more); their hopes and wishes for the future generations – and more. In total we hoped to interview a dozen or so representatives – both men and women, and from the Bengali and Pakistani communities.

The questions we asked 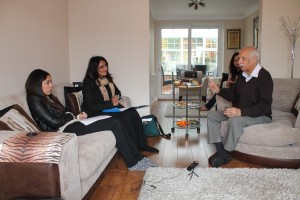 The interview questions we asked were developed by Shamshad Khan in consultation with the Different Moons Team and adapted from questions produced by the Ahmed Iqbal Ullah Resource Centre.  They include questions aimed at recording first generation South Asian experiences of migration to Rossendale. In addition, we asked interviewees to recall lullabies, stories, sayings and poems in their mother tongues. These questions were of particular interest in relation to cultural heritage and partly informed by our findings from the pilot with St James’ C.E. Primary School with respect to lullabies (see under pilot).

There were a separate set of questions used for a small group of mothers who had been invited to a mother and babies sensory workshop session. Some of these interviews were conducted in groups of two’s and threes and were centred around lullabies and preserving heritage. 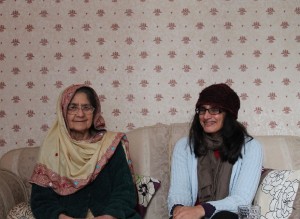 The interviews were conducted in English or whichever language the interviewee was most comfortable to speak in. A few of the questions specifically called on interviewees to use their mother tongues to recite lullabies, poems, sayings  or stories. As a result there are sections in Bengali, Urdu, Pashto, and a little in Hindko. The interpreters and translators included Arry Nessa, Husena Khatun Islam (Ruby), Habiba Shenza and Shamshad Khan.

The interviews were transcribed by Arry Nessa, Bob Frith, Habiba Shenza with input from Shamshad Khan. The transcribing was a much bigger job than we had anticipated, partly because of the amount of audio material collected and because of the translations required. Although we attempted to tighten up the process, in some instances this was over ridden by the desire to collect valuable and original data. 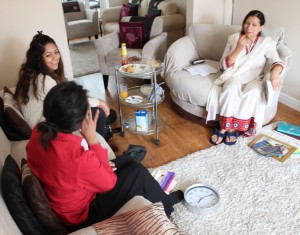 To enable the widest possible access to the material, it was agreed that it would be valuable to attempt to transcribe the South Asian languages in English script (phonetically). This was in appreciation that it would be of general use and to second and third generation South Asians in particular. This process identified further areas of interest relating to, loss of language facility, cultural heritage and the teams varying language abilities, none of whom were professional interpreters or translators.  With respect to the Urdu, variation in the phonetic spellings being used by Arry (mother tongue Bengali) and Shamshad (mother tongues Urdu and Punjabi) became apparent. It was at this stage that we employed the skills of Omair Khan to help standardise the Urdu phonetics as far as possible. This aim to standardise the working process resulted in the creation of a phonetic Urdu dictionary for use by the Urdu transcribers, and proved a valuable resource. Due to time and resources we were unable to adopt the same process for the other languages and these are produced as an approximation, but we feel will none-the less be a helpful guide to those who are at all familiar with the languages concerned. 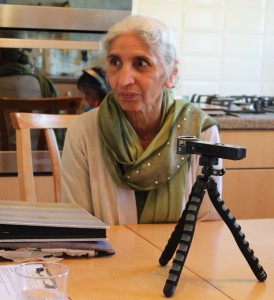 An important inspiration behind the Different Moons project was the wish to publish an archive that would fill the gap in local history libraries with regard to the background and history of the sizeable local South Asian communities.

The project was funded through the Heritage Lottery Fund, and one of the main outcomes was delivering a bound set of transcribed interviews to Haslingden, Rawtenstall and Accrington Libraries; to the Ahmed Iqbal Ullah Race Relations Resource Centre at Manchester Central Library, and to the North West Sound Archive, along with audio recordings, and the short animated films associated with the interviews. We would also attach a short essay on the history and background of the local South Asian communities.

We used a simple and inexpensive Zoom H1 digital audio recorder for interviewing. It costs between £60 and £70; stored plenty of audio and was unobtrusive. There are other similar devices on the market, and we found that having a case and small desktop tripod was also useful. 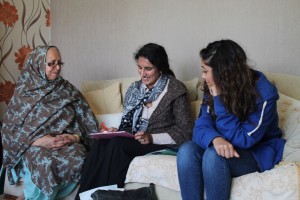 Habiba, and they would ask  pre-determined questions; I simply introduced myself as the ‘technician’ and set up the recorder. I also asked if they would mind if I took a few photographs during the interview. In all cases people were amenable to this. I used headphones to check throughout that the things were recording satisfactorily. Other than this I sat quietly in the background.

Shamshad, Habiba and I had agreed on a set of questions (see below – Interviews) and, with minor variations, every interviewee was asked the same things. We also had a permission slip for people to sign, and this gave us copyright permission to use the material gathered as part of the Different Moons project and, ultimately, as part of the archive (see below).

We quickly learned to be super organised! To have the recording equipment easy to reach and assemble; the permission slips and questions ready and at hand. Even more important was to have an effective filing system in place once the interview was over – for the permissions, for the recordings, and eventually for the transcriptions.

The interviews sometimes led people to recall painful things. Of course this wasn’t our intention, but inevitably people would find themselves thinking of loved ones, partners or close family members, many of whom had passed away. Sometimes simply the process of remembering events from long ago would mean that deep emotions would rise to the surface. It wasn’t unusual to find that everyone in the room was wiping away tears.

The most time-consuming part of the process was transcribing the audio files. It typically took an hour to transcribe 5 minutes of recording. So one of the first things we learned was to keep the recordings succinct. Occasionally, going ‘off-subject’ was interesting and worth allowing the interview to follow a fresh train of thought, but on the whole we found it important to keep the interviews focused. Our very first interview lasted over 2 hours. By the end of the process we usually managed to complete an interview, without undue haste, in just over half an hour.

Transcribing was made even more difficult if people talked over one another – so we learned to try to separate out questions or comments so the audio recording was clear. The most difficult thing was when translations were required in the interview process. Sometimes the interviewee spoke largely in Urdu, or Pashto, or Bengali, and we would use a translator. These different voices and the inevitable interruptions would make the transcription process harder, and far slower.

Technically the recording process, generally, went well, but on one occasion an interviewee wore bangles and metal bracelets which not only rattled but caused electrical interference to the recorder when she leaned forward. Fortunately we only lost a few minutes of that particular recording.