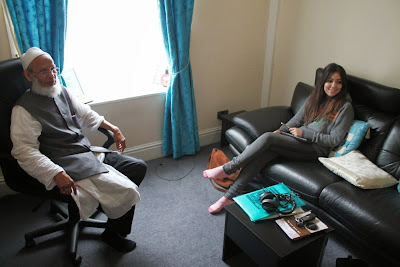 The past couple of weeks have involved two separate visits to record the story of Mr Aslom Miah. Mr Miah was born in Bangladesh and has lived in Rawtenstall, in the same house, for 51 years.
Mr Miah has been writing a book about his life. How he arrived in England in 1963 speaking no English at all; how he found work in the local mills; then on the buses; between these  jobs he built up a chain of restaurants throughout the area. His story include how he quickly realised that he must learn English, and how with the help and support of friends and acquaintances, English-language classes were organised in Rawtenstall. Mr Miah went on to act as an interpreter for the Home Office, and the Crown Court. Now, still very active and alert, he wants to pass on his story to a younger generation.
I visited Aslom Miah first with my colleagues Habiba Shenza (above), and later with Shamshad Khan. In total we made over 3 hours of recordings of Mr Miah talking about his life. Because of the work on the book recently, his memories are particularly fresh and vivid – and a wonderful gift to the Different Moons project.
In fact I knew Aslom Miah in the 1980s, when Horse + Bamboo had a workshop in Foundry Street in Rawtenstall, which is just round the corner from the Miah family. His young children used to come to play in our workshop, and one of the delights of these recent interviews was meeting his daughters Aysha, and Amina, once again. It was lovely to hear their memories of those days – of our horses, making clay models, and the characters they met in the theatre workshop.
Aslom Miah