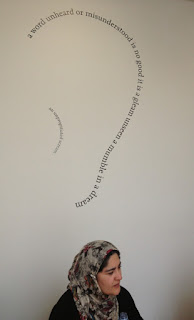 Yesterday’s meetings at Haslingden Library were fun, and very useful. My neighbour at the studio, Nusrat, came along and brought a few of her friends. I introduced them to Shamshad and outlined my ideas for the Different Moons project. The group of us then had a good humored and wide-ranging discussion. Among many things, memories of parents; childhood reminiscenses; the state of the country – and poetry. As we talked it became clearer that the idea of an exhibition, celebrating the south Asian community in Rossendale, with one aspect of it being about the history of that community but another a creative programme revolving around poetry and textile work, would be both well received and effective in bringing people together.
Towards the end of the meeting we were joined by Leesa Amin, who talked more about her youth groups, during which it emerged that the library had been fire-bombed, and that rather than respond by adding more security measures the librarians asked for a free-for-all youth room with PCs and other facilities. This – the Headspace – has been a great success, and when we visited Shamshad met two of the young girls she remembered from the work at St James School. One promptly told her that she had gone to on to find out the meaning of her name (a task Shamshad had suggested) and that it was ‘ strong’. For the work with the 11-19 age group Shamshad suggested that she worked alongside a rapper/poet, Avaez Mohammed,  who she knew from Blackburn.
Later we were joined by Esther and went to the new Positive Start centre in Rawtenstall. Here we met with Shaju Ahmed; heard about developments at the centre, and discussed ways in which the two organisations could work together to find funding for the project. All very impressive.
Avaez Mohammed, Headspace, Positive Start