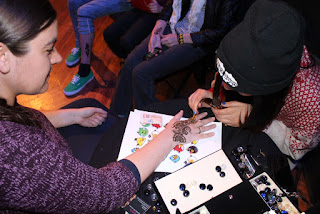 Tomorrow I’ve a series of meetings that I hope will set Different Moons on a clear route forward. The idea of aiming for an exhibition about the local south Asian heritage community has been well received in informal discussions, and both the Whitaker (Rossendale’s museum) and Haslingden Library have expressed an interest in hosting aspects of it. So the first meeting will be with Shamshad in which we’ll look at how we can create an exhibition which is both informative and has at its heart a core of individuals stories and reminscences about their personal experiences.
Then we’re meeting some of the interested partners at Haslingden Library, including Nusrat Rahmen from the sewing group, and Leesa Amin who runs the youth group at the library. After peeking in at the youth group we’ll head down to Rawtenstall to talk to Shaju Ahmed from Positive Start. Positive Start is a Rossendale-based organisation set up “to support and assist young people, particularly from a disadvantaged and Black Minority Ethnic groups…” It was set up in 2003 and has recently raised the money to open a new youith centre in Rawtenstall. Esther met with their committee a few weeks ago and explained the ideas behind Different Moons. They were highly enthusiastic, and tomorrow we end the day by following up that first meeting.
Nusrat Rahmen, Positive Start