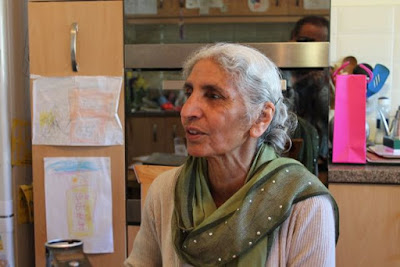 Recording interviews with some of the first people from South Asia to travel to Rossendale and make it their home is still continuing as part of our project. We’ve already reached the number we expected, but we’re continuing to add a few more interviews from people with unusual stories, and to achieve a good balance of gender and language backgrounds.
Today I went with Shamshad Khan and we interviewed Mrs Azfar. She lives in Weir, near Deerplay, on the moor between Bacup and Burnley – well apart from the South Asian communities at the other end of the Valley, in Haslingden or Rawtenstall. She has spent half a century living and working like this; a life with her own family and children but cut-off from most of the local South Asian community.
To live so apart is unusual in itself, but the Azfars lived and worked a small hill-farm, with 9 acres of land. She and her husband farmed sheep and cows, and she still retains their land which is 1600 feet above sea level. Today the weather was unusually glorious, but it must often have been a hard life. Her story is all the more fascinating as the idea of farming was a dream of her husband, now sadly passed away. He didn’t come from a farming background in Lahore, and in fact was a draughtsman when they married – but they saved to fulfil his dream and buy their land in Weir. Finally, when farming was no longer sustainable they built and operated a petrol station across the road, where she says they made many friends. Now she lives with her daughter Ayesha and her husband and family.
hill-farm, Mrs Azfar