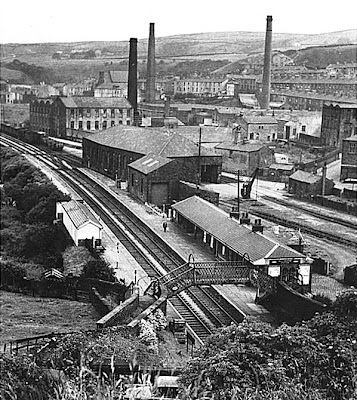 Haslingden, late 1950s, photograph courtesy of RM Nostalgic Railways. The period when the first of the immigrants from Pakistan and Bangladesh were beginning to arrive in Rossendale to work in the cotton textile mills that were short of a labour force, especially for the unpopular shifts – usually the night-work.
If you were trying to find this scene today you would be stuck. The station was closed in 1964, the railway disappeared and its route is now the A56 Haslingden By-Pass, opened in the early 1980s. The chimneys have been demolished too.
We also have agreed with the Whitaker (Rossendale’s Museum & Art Gallery) to work towards an exhibition in exactly a year’s time celebrating the history of the South Asian Community in Rossendale. We’ve also started planning the next stage of Different Moons, and soon expect to begin working on new projects within Haslingden.
Haslingden, the Whitaker