Our approach to the sessions and workshops 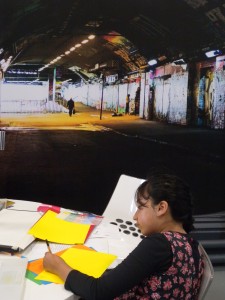 The project has been led by artists, themselves mainly women from a South Asian and Muslim heritage. Rich and evocative source materials were used to inform the sessions along with flowers and a giant paper moon to create a welcoming and attractive setting. Heritage interviews, art forms and themed discussions were used as springboards for inspiring the writing.  For many participants who engaged in the workshop series it was the first time that they had tried out the art forms on offer including mehndi (henna) art (Habiba Shenza), paper-cut (Maryam Golubeva), Arabic calligraphy (Farzana Patel) and animation (Rehmat Gangreker).

As part of the creative process participants were encouraged to “have a go” and feel that it was “okay to make mistakes”. Exercises to encourage intergenerational dialogue and build self esteem were included. Participants showed great pleasure and pride in the use of materials of South Asian and Islamic Heritage which they were familiar with or keen to learn about. In particular the poems of writers including Safuran Ara (Bengali), Imtiaz Dharker (English), Hafez (Farsi), Samina Raffat Hussain (Urdu) Basir Kazmi (Urdu) and Baba Rahman (Pashto) were used as inspiration.

The workshop programmes and lesson plans were designed and led by poet Shamshad Khan in collaboration with the artists. Teaching materials produced by the Ahmed Iqbal Ullah Resource Centre were used to model the first children’s workshops based on Mr Hussain’s life story. Workshop plans and resources were circulated to artists, teachers and support staff in advance of the sessions (see bottom section: Workshop Plans to view and download a selection of Workshop Teaching Packs).

Women, girls and children showed equal surprise and pleasure in the writing that they produced. The confidence they developed and the joy shared in working with the themes of the moon, fathers and education, early Asian migration, family stories and Asian women role 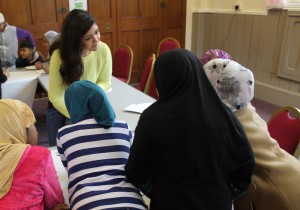 models is evident in the pieces that appear in the Different Moons book.  A selection of the poems and stories written during the workshops are included in the Different Moons book alongside images of artwork from the artists and project events. There were over one hundred and sixty participants in total including a girls’ animation groups who used one of the joint poems created by the Haslingden girls’ group to inspire their animations.

The women who attended were of first and second generation and of mainly Pakistani and Bengali backgrounds. Most women wrote in English, a few in Bengali and Urdu, in which case their work was 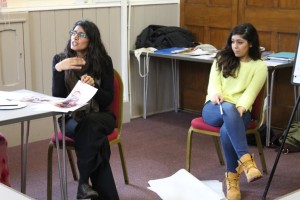 translated into English. In some instances the women gave spoken contributions and their words were scribed by support staff.

For many of the women the workshops were a journey of creative expression and confidence building through the creative writing process. To inspire and make them welcome the space was set up with fresh flowers, spread fabrics on the floor with a changing array of objects and post cards to initiate discussion.

The poems the women wrote as a result of the various exercises ranged from brief comparisons of each other with the moon to spiritual reflections on the moon and water. Other pieces are based on researching and recollecting their parents own experiences of arrival to Rossendale, father – daughter relationships and attitudes towards education inspired by the heritage interview with Farida Munir. 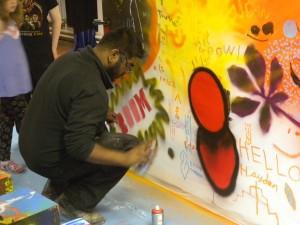 displacement and loss. There was also deep and fond sharing of common experiences and learning. It was a challenge to balance the immediate needs of the women at these points with the pressure to generate poetic outcomes.

For the women to engage in the sessions and to achieve creative writing outcomes was a triumph. Many signed up to the series attracted by the mehndi (henna), paper cut art and Arabic calligraphy offered. Most, not unusually, felt they would not be able to write a poem.

The poems and accounts they wrote, many of which are featured in the Different Moons book are a celebration of how these self-limiting perceptions were overcome and the creative process embraced wholeheartedly. To quote one of the participants (R.Z.) “She is like the moon. Powerful and bright. She shines at everything she does.” 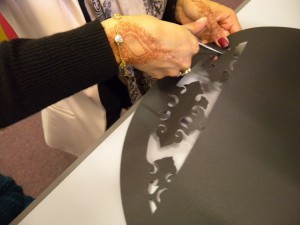 The two girls’ groups that took part were Haslingden Library Girls’ Youth Group and a specially convened group based at the Dave Pearson Studio. Girls were aged between age eight and eighteen and of South Asian heritage.

The girls were introduced to the heritage theme, the paper cut carpet (created by Maryam Golubeva), animations by various artists based on the interviews and poetry. Poems were written in response to a visualisation exercise of a journey to the moon seated on the paper carpet. The girls listened to extracts from the interview of Mrs Zamro Rahman (Habiba Shenza’s grandmother). As part of the heritage theme, girls were asked to find out who the first woman in their family to come to Rossendale was and what they might like to ask their grandmothers about their lives. The letters to Grandmas written in response to this exercise are touching exchanges with a poignancy all of their own.

Finally, inspiration was drawn from the poem “A Bengali Woman in 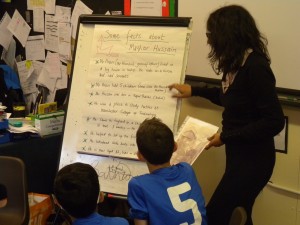 Britain” written by Safuran Ara and translated into English by Debjani Chatterji. The two girls’ groups discussed the feelings and attitudes described in the poem and wrote their own version of being an Asian girl in Haslingden. The girls wrote solo pieces and a group poem that was generated by the girls choosing a favourite line from their poems. The poems they wrote are a charming and lively expression of contemporary British Asian girl power.

The children were aged from as young as six to twelve years of age. The greatest number of sessions were run as part of the Islamic culture lessons at the Rossendale Valley Islamic Supplementary School (RVISS, Haslingden) and others with Year 4 and year 6 pupils at
St Mary’s C.E. Primary School, Rawtenstall.

The sessions with RVISS included mehndi (henna) and Arabic calligraphy sessions. They visualised journeys to the moon seated on the paper cut carpet and wrote charming and quirky pieces imaging taking their Grandmas to the moon. They also responded to the story of the bird told by Samina Hussain recorded as part of the heritage interviews.

Both groups brainstormed facts about the moon and used these to write comparisons of themselves and their partners with the moon, also drawing on the exercise of sharing good things about themselves and each other. They learnt new facts, for example, that a crater on the moon is named “Nasireddin” after the Persian astronomer and scientist Nasir al-Din alTusi and about the life achievements and journey of Mazhar Hussain one of the first Asian men to settle in Haslingden in 1956.

It was significant to see how readily the youngest participants engaged with the creative process. Playfully making unexpected links between themselves and the moon. The children generated some of the most open and exuberant responses to exercises like what their favourite letter is in any language and who was the first person in their family to come to Rossendale. They wove this wonder and imagination into delightful stories and poems.

The enthusiasm and interest the children took, whatever their ethnic backgrounds, in the creative activities and materials drawn from South Asian and Islamic culture is encouraging and identifies a thirst and the value of offering sessions of this nature to young children. The pieces they wrote were a joy to read and give an optimism for the future.

The workshop programmes and lesson plans were designed and led by poet Shamshad Khan in collaboration with the artists. Teaching materials produced by the Ahmed Iqbal Ullah Resource Centre were used to model the first children’s workshops based on Mr Hussain’s life story.

A selection of the workshop plans are available Monitoring, permission and evaluation/feedback

Monitoring of ethnicity and age was carried out and permission sought for use of materials. These processes were made possible with the help of support staff. This additional administration along with gathering feedback during sessions was often a challenge in the two hours allocated to the sessions. A selection of feedback from the participants gives an indication of the success of the programme of workshops. 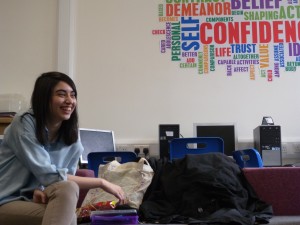 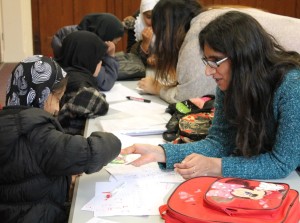 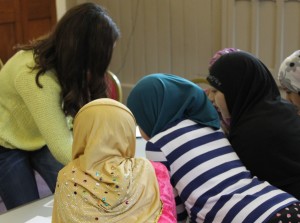 “I’ve always wondered who was the first Asian person to come and now I’ve found out. I like asking my parents what their childhood was like and when they first came here. I’ve really liked doing the writing.”

“My favourite lesson was this because I’ve learnt to use mehndi and I learnt that my mum said I was helpful but I talked too much.”

“I liked the bit where we learnt about the moon. I’ve learnt about my family, my grandma was the first person to come to England who is still alive.”

“At the start didn’t feel I could write a poem – learnt that I could.”

“…Everyone got so many ideas that you’d never imagine they’d come out with.”

“With the sayings and the writing I got emotional – in a good way.”

“Learnt where paper cutting comes from, history of Chinese art, really enjoyed it.”