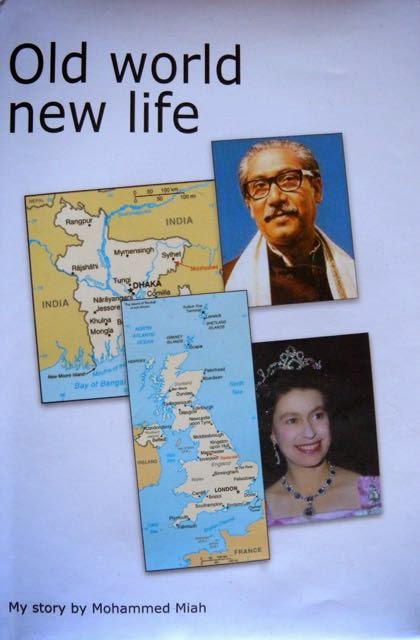 Early in the week I received a message asking if I would go and see Mr Miah. M. Aslom Miah was one of the first generation of immigrants to settle in Rossendale, and we interviewed him last year for the Different Moons Archive. I first met Aslom when I arrived in Rossendale as a 19-year old student in 1966, and he was working then as a bus conductor on the circular bus from Haslingden to Helmshore. A very dedicated, serious yet sociable man, he went on to own a chain of curry houses, and later – when Horse + Bamboo moved to Rawtenstall in the mid 1980s – it turned out that he was living with his young family just round the corner from us.
Still living in that same house, Mr Miah is now a senior member of the Bangladeshi community in Rawtenstall. He has recently returned from Bangladesh, to visit his family and the village he grew up in – Moishashee, in Sylhet. There he is a major giver and supporter of the High School, and he told me how poor the school is – 600 pupils with just 4 or 5 poorly paid teachers. Aslom is shy about discussing his generosity and support for the school, but he clearly despairs of the current situation. He has a passion to support local village children in their education. Talking about his own life he returns over and over again to the fact that he was the first boy in his village to have a secondary education and to the great advantages it gave him. He clearly wants as many other village children as possible to share his good fortune.
Mr Miah has now published his book ‘Old world, new life’ which tells his story. It covers many of the things he told us in our series of interviews, and he has been helped by a friend, Bruce Simpson, to make it into very readable and interesting story. Despite being the story of a personal and unique journey, telling of his Sylheti village background and his decision to seek work in the UK, in many respects it stands as a tribute to many of his generation who made a similar journey and now have families in Lancashire and more widely in the UK.
Bangladesh, Moishashee High School, Mr Miah, Sylhet