|  No Comments
Today was the last of the two days Shamshad Khan worked at St. James C of E Primary school in Haslingden. This is a pilot project for Different Moons, and we were excited to see what the response would be from the children after last week – when they took home their little matchboxes with questions for their parents and grand-parents.
I walked in the room and found Mohabbat – love or affection in Urdu, and Arabic – written on the classroom floor in matchsticks, the matchsticks from the matchboxes! 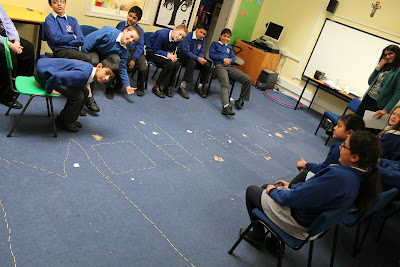 The children then went round in a circle, each saying what their name was and what it meant. Then the same with an answer to the question of ‘what was the first word you spoke?’
Then an impromptu poem was written jointly by the group – their own, slightly wacky, lullaby: 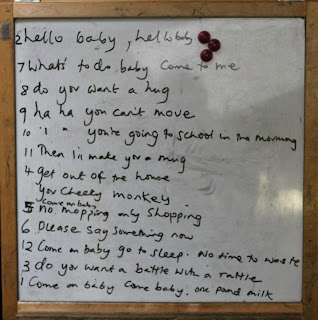 The session showed a tremendous response from the children and their families to the questions we had asked in the first session. It also demonstrated that we need to think more about how to develop these quite simple ideas if we want stories and reminiscences to emerge from the families. This and more will emerge from the evaluation that we’ll carry out with help from the school, the children, and Shamshad. But in its small way these two sessions have also been a great success.
Mohabbat, Shamshad Khan